skip to main | skip to sidebar

Please Contact S Prewitt for Interviews at (901) 413-0203 or email information@yourblackpublicity.com.

Dr. Elaina George, an Otolaryngologist out of Atlanta, says that the doctor alleged to have killed Michael Jackson was not only unethical, but incredibly irresponsible in his choice of medications. Dr. Conrad Murray is subject to investigation after Jackson’s death was ruled a homicide in initial autopsy reports. But while many believe that Jackson’s death was an accidental occurrence, Dr. George states that the combination of drugs given to Jackson was almost likely to kill him.

“There was no way that harm would not have come to Mr. Jackson,” says Dr. George, who advocates for doctors on a regular basis. “It was beyond negligent to give him a mixture of three different kinds of sedatives, a muscle relaxant, an antidepressant in addition to Propofol, a general anesthetic that is only used in an operating room setting (because it can stop someone’s breathing). Each of these drugs by themselves can be lethal, but together it is a recipe that will almost definitely kill someone.”

Posted by YBW Family at 7:39 PM No comments:

(Syracuse, NY) - Dr Boyce Watkins, a prominent Black professor at Syracuse University, offered tips to President Obama on how to truly make the case of Harvard Professor Henry Louis Gates into a “teachable moment.” Professor Gates was arrested last week by Sgt. James Crowley of the Cambridge Police Department, opening a firestorm of controversy. Dr Watkins argues that the powerful reaction was due to the fact that America continues to fear a free exchange of ideas when it comes to racial inequality.

Posted by YBW Family at 4:10 AM No comments: 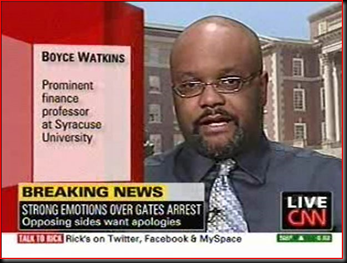 Posted by YBW Family at 3:10 PM No comments:

Dr Boyce Watkins of Syracuse University spoke with TV and radio show host Montel Williams on Monday.  The conversation focused on race and racial profiling.  They are going to also speak on financial advice in the future.

Posted by YBW Family at 7:09 AM No comments:

For immediate release, please contact S. Prewitt at (901) 413-0203 for interviews or email info@BoyceWatkins.com

During a nationally-televised press conference, President Obama went on to state that the Cambridge Police Department “acted stupidly” by arresting Gates. Professor Watkins felt that this was a mistake.

“The public has analyzed this case without knowing all the facts, and the president should be the last person to jump on such a bandwagon,” says Watkins, who was the only African American in the world to earn a PhD in Finance during the year 2002. “This was not your typical racial profiling case, and a good man’s career may be destroyed because of it.”

As part of his work with AOL and NBC, Dr. Watkins spent the week speaking with both Black scholars and police officers to get a more balanced perspective of the situation. During this research, Watkins found that the officer may not have violated procedure.

“Many people don’t realize that there is a reason that Gates had to be questioned, even after proving that he lived in the home,” says Watkins. “He could have been an estranged husband breaking in to hurt his wife. This happens all the time and the officer had an obligation to investigate the situation thoroughly.”

Watkins goes on to state that disorderly conduct typically relates to any disturbance to the public, and that if Gates was irate on the front porch, such actions might have given reasonable cause for his arrest.

“The goal is not to condemn Professor Gates or Sergeant Crowley right off the bat,” says Dr. Watkins. “We should hear from witnesses and get further evidence before we assume that the officer was behaving abnormally. The fact that Sergeant Crowley’s union has publicly supported him so strongly might be an indication that he didn’t do anything wrong. They could have remained silent.”

Dr. Watkins, who fights regularly for the rights of African American men, says that he is not attempting to undermine Henry Louis Gates. Instead, he claims that he is fighting for fairness for everyone, and waiting to hear all the facts before passing judgment.

Dr. Boyce Watkins is a Finance Professor at Syracuse University and author of “What if George Bush were a Black Man?” He is also an analyst for NBC and AOL Black Voices. For more information, please visit www.BoyceWatkins.com.

Posted by YBW Family at 6:18 AM No comments: 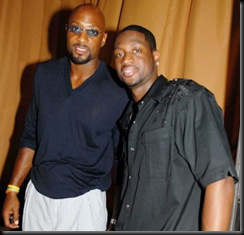 Austin, TX – On Saturday July 11th Global Consumer Innovation, INC (www.globalconsumerinnovation.com) is partnering with Lalah Hathaway, daughter of Donny Hathaway to put together a young songwriters and singers workshop as part of the Alonzo Mourning and Dwayne Wade Summer Groove.  The event will engage, motivate, and excite musically gifted youth by introducing, exposing, and involving them with successful recording artists while she rehearses for her main stage performance for the Summer Groove.  The youth will be able to engage Lalah Hathaway in conversation and better understand song writing, vocal training, and the preparation that goes into a performance.

Global Consumer Innovation Creative Director Jonathan Clark says “The Summer Groove is an integral part of the Miami community and we are excited to sponsor this special event where youth will learn that the music industry is about more than fame and glamour, but preparation and integrity.”  Clark was the former Vice President of Marketing for Motown records before joining Global Consumer Innovation.

Click to read more.
Posted by YBW Family at 10:07 AM No comments:

The Top Money and Love Book in America